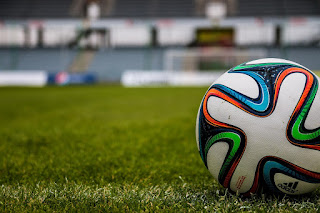 Glimpses of our true character are seen in the split second decisions we make.
I witnessed a spectacular move during the RVCS vs Stuart Hall Middle School soccer game.  RVCS was ahead by a few goals when two opposing players crashed into each other, knocking the Stuart Hall player to the ground. The referee never blew the whistle, leaving the ball in play. The RVCS number one jersey turned and looked toward the goal, an easy shot. There was no one immediately on him. Instead of taking the shot, the number one jersey glanced down at the fallen player. Number one, extended a hand to the Stuart Hall player still on the ground.
J.O.Y. is spoken in our home. J-Jesus first, O-others second, Y-yourself last. It was a joy to witness a selfless act during a competitive sport. This player chose to lend a hand rather than scoring another goal.
“If either of them falls down, one can help the other up. But pity anyone who falls as has no one to help them up.” (Ecclesiastes 4:10, NIV)
I believe glimpses of our true character are seen in the split second decisions we choose to make. As a parent, we question if we are doing getting it right. Last night, I sat bewildered and proud as I watched these events unfold. Number one instinctively responded in a manner in which he was trained: put others first.
Last night the true character of the RVCS number one jersey shined through. I am proud to say, “That’s my boy!”
~Tearful and slightly obnoxious soccer mom,
April White
Connect with me:
Email redchairmoments@gmail.com
Facebook http://www.facebook.com/RedChairMoments
Twitter http://www.twitter.com/RedChairMoments

These words of encouragement as better than flannel pajamas and fuzzy socks on a cold Winter’s Day.

My free gift to you.

You have my word.