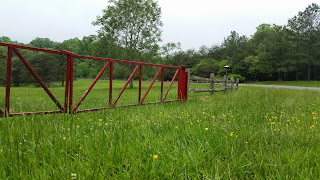 One sunny morning, on the way to church, Jesus interrupted a man’s life near a Sheep Gate. I’ve been meditating on this story, found in John chapter five for nearly a month. This is my abbreviated version of the story, which is by no means a substitution for the real Word:
Jesus was on his way to church when He saw a man at the pool of Bethesda, near the Sheep Gate, who had been an invalid for thirty-eight years. This was a place where the sick came for healing. From time to time, the angel of the Lord would stir the waters, and the first one in the water would be healed. Jesus approached him and asked “Do you want to get well?” The man offered excuses that he couldn’t get to the water. Jesus said, “Get up! Pick up your mat and walk.” Instantly the man was healed. The unnamed man Jesus healed was unaware of who had healed him. Later, when the man was in the temple, he learned it was Jesus who had healed him. The man told everyone “it was Jesus who had made him well.”(John 5: 1-15, NIV)
Each time I read this passage, the words Sheep Gate, leap off the page. Since, all Scripture is God breathed and useful for teaching (2 Timothy 3:16), every word included has significance. Why did the author John, include that detail? What was important about the Sheep Gate? 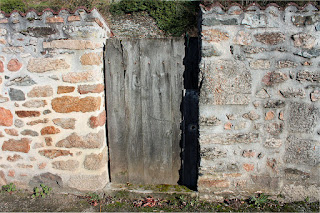 Last night I brainstormed everything I could think about in reference to the Sheep Gate, gates, sheep, shepherd, green pastures, and the twenty-third Psalm. As I jotted down snippets from memory, I felt as though I was working a puzzle.  When I work a puzzle, I start with the edges first. Here are the puzzle pieces I’ve been working with:
The Sheep Gate
The Sheep Gate is the first gate mentioned as a gate in Jerusalem (Nehemiah 3:1, 32). It was the gate where the sacrificial sheep entered the temple. It is interesting to note that the Sheep Gate was the first and last gate mentioned in the rebuilding of the temple in Nehemiah. Historically, this gate points to Jesus when John the Baptist said, “Look, the Lamb of God who takes away the sin of the world” (John 1:29, NIV).
Jesus is the Gate
Jesus described Himself as the Sheep Gate – the only door for salvation. “I am the gate for the sheep…I am the gate; whoever enters though me will be saved. He will come in and go out, and find pasture” (John 10:7-9, NIV).
The Good Shepherd 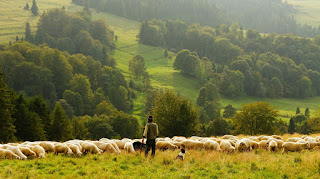 A shepherd’s primary responsibility is to provide protection, safety, and rest for the sheep. Hundreds of years before Christ’s birth, David the shepherd boy turned King, penned these famous words from the twenty-third Psalm:

“The Lord is my Shepherd; I shall not be in want. He makes me to lie down in green pastures, He leads me beside still waters, He restores my soul. He guides me in the path of righteousness for His name sake. Even though I walk through the valley of the shadow of death, I will fear no evil, for You are with me; Your rod and Your staff, they comfort me…”
Jesus describes His personal role as providing protection, safety and rest as the Good Shepherd. “I am the good Shepherd. The good Shepherd lays down His life for the sheep” (John 10:11, 15, NIV). “The thief comes only to steal and kill and destroy; I have come that they may have life, and have it to the full”(John 10:10, NIV).
Called by Name
Jesus knows us by name. In a conversation with the disciples, Jesus said
“the sheep listen to His voice. He calls His own sheep by name and leads them out. When He has brought out all His own, He goes ahead of them, and His sheep follow Him because they know His voice”(John 10:3-4, NIV). 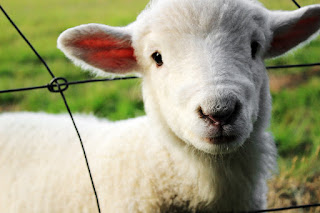 The Unnamed Person
I find it intriguing that Jesus, the Good Shepherd who calls his sheep by name, does not call this person by name. Instead, He refers to him by his condition.  Notice Jesus did not ask, “Do you want to walk?” No, Jesus asked, “Do you want to get well?” I believe He was referring to physical and spiritual healing. It is also fascinating that the unnamed man, who I call “Matt” (a.k.a. mat man), does not know the name of the man who healed him. It isn’t until “Matt” goes to the temple that he learns it was Jesus who healed him.
Green Pasture
As I ran past the fence posts and red gate on my morning run, I pondered the meaning of the Good Shepherd leading His sheep to pasture. In an article titled Sheep and Green Pastures in the Christian Worldview Journal, Colley Tettelbach writes: 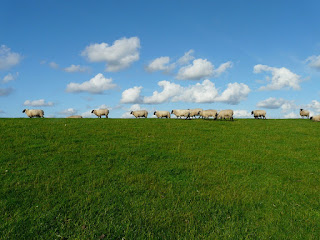 “Green pastures in David’s time were bare, rocky hills with just enough vegetation to sustain the sheep for that day. The sheep were dependent upon the shepherd to lead them to the forage that they would need for the next day. “Green pastures” for the ancient Israelites were symbolic of the fact that they could trust God for their daily sustenance. “Green Pastures” meant that they had enough for this day and that they could trust God for tomorrow’s portion.” http://www.breakpoint.org/the-center/columns/worldview/14818-sheep-and-green-pastures

Near the Gate
Notice in John 5:2 the author describes not only the character’s physical location, but also the proximity to the Sheep Gate. “Now there in Jerusalem nearthe Sheep Gate a pool…” I have read this story every day for almost a month. Until this morning, I never noticed the word “near.” (Imagine how stinky that place must have been to be near the sheep gate.) This man was near the temple, but because of his condition, he couldn’t get inside.  Jesus met him where he was! Praise God, He meets us where we are at! Jesus came near to him. The Sheep Gate Himself walked up to the invalid and called him: “Get up! Pick up your mat and walk” (John 5:8, NIV).
Opposition
As soon as the man was healed, he did what he was told. He picked up his mat and walked. Jesus healed him on the Sabbath. Ancient Jewish tradition prohibited any work on the Sabbath. Carrying a mat was considered work. Matt was questioned by the local Jews and reminded that it was forbidden to carry his mat on the Sabbath. I wonder if he was thinking “Who cares? Can’t you see I’m walking for the first time?” When God calls us and performs a miracle in our life, expect some opposition.
The Temple 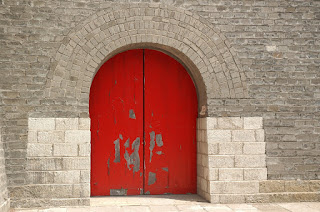 This miracle occurred outside the temple. Most miracles in the Bible and in our lives today occur in our everyday locations. I had never considered that until I read this story. Yes, God can heal His people in church, but it is a good reminder that most of the healing takes place outside the church walls. The church is a place of encouragement and strength for our journey.

For weeks, I’ve been trying to work the puzzle of this story. With each piece God has taught me something new. I think the greatest lesson learned is that God doesn’t always give us all the details at once. Instead, He reveals what we need when we need it. I am still working on the Sheep Gate puzzle.  I know the Lord is my Shepherd.  He is the Gate. His was our perfect sacrifice on the cross. I will follow my Shepherd through the Sheep Gate. When I enter the gate to heaven, I will be carrying my unfinished Sheep Gate puzzle. Perhaps Jesus Himself will add the last piece.
What about you? What part of God’s word has you puzzled? Leave a comment below and join the conversation.

Advent is the season of preparing our hearts for Christmas and Christ's birth. Advent begins the fourth Sunday before Christmas and ends on Christmas Day.

My free gift to you.

You have my word.